André Rieu: The King of Waltz returns to the UK & Ireland in 2015 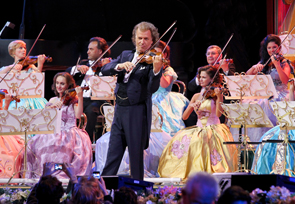 The world’s most successful violinist will return to the UK & Ireland with his Johann Strauss Orchestra. Fans of the Dutch King of Waltz can look forward to a completely new program with a fantastic show. Tickets are now available via andrerieu.com

In 2014, André Rieu’s colourful and fun concerts, a musical journey around the world, enthused ten-thousands of fans in the UK. Now the King of Waltz has announced that he will return to tour the UK in 2015.

André Rieu: „I am very much looking forward to returning to the UK! It’s wonderful to see how people from all over the world dance, sing along with us and have a lot of fun, no matter if they’re young or old, from the UK, Mexico, Australia, Brazil, Germany, Scandinavia…. We celebrate a big party every night together. I see so many happy faces each night in front of me and this proves that classical music is for everyone and that we were able to reach our audiences hearts! So I hope you will all join us for another very special evening – see you in December.”

Get your tickets now for an evening full of humor, music and emotion for young and old. Immerse yourself into the most romantic melodies, or get out of your seat and dance in the aisles on one of the catchy waltzes and tunes from opera and operettas, film music and well known folk songs. Experience the magic of André Rieu at a festive and memorable evening and come see why André Rieu is one of the most popular live acts in the world! Over 35 million sold DVDs and CDs , 411 platinum and 171 gold records, more than 1,5 million Facebook fans and annually about 1 Million concert goers speak for themselves: André Rieu is the most successful classical touring artist worldwide and appears continuously in the Billboard Chart’s Top Ten for ten years. Asia, Australia, North America, South America, South Africa, Europe – there is no continent where André Rieu does not fascinate the audience with his waltz. For many people worldwide a concert by André Rieu is the highlight of the year.