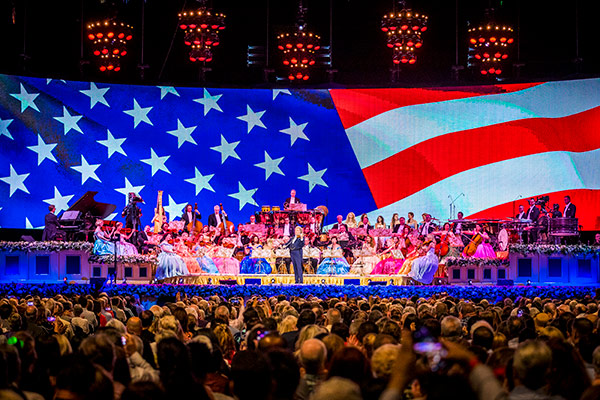 André and the Johann Strauss Orchestra celebrated the beginning of a new decade with their traditional New Year’s Concerts in Amsterdam and Antwerp, followed by a lovely tour through Germany. In March, they returned to the U.S. looking forward to performing for 70.000 fans. But it was not to be.

During their first concert in Tampa, the government of the United States announced the new COVID-19 rules and imposes a ban on travel from Europe. André and the JSO were forced to postpone their remaining tour and to return to the Netherlands with a heavy heart.

Back home the pandemic around the world worsened, and it became clear that no more concerts would take place this year. No more music, no more fans, no stage performance.

During the lockdown, André spent a lot of time with his family and discovered his great joy for baking. He also gave many interviews for different renowned media.

In addition, André set up a beautiful Online Concert called “Magical Maastricht” with all the highlights from 15 years of Maastricht summer open airs, but he also had a special Christmas gift in store for his fans: In November he releases his brand new LIVE – album “Jolly Holiday” to bring the sound of the wonderful Christmas into the living rooms of his fans. The album is a fabulous mix of the most famous and beloved Christmas tunes of all times, such as Jingle Bells, We Wish you a Merry Christmas, Silent Night and many others. Recorded live in 2019 during his Christmas concerts in Maastricht the album also features a romantic and cheerful Bonus DVD, which gives the viewer an exclusive look behind the scenes and follows André when he sets up the stage for his Winter Wonderland.

André and his team remain optimistic for the future. All concerts have been rescheduled, and new dates have been found. The introduction of the vaccine will mean an end to this awful pandemic. And when this is over, André and his orchestra will make you forget your worries and sorrows.

We thank you for your loyalty and patience and for being a member of our big André-Rieu-Family always.