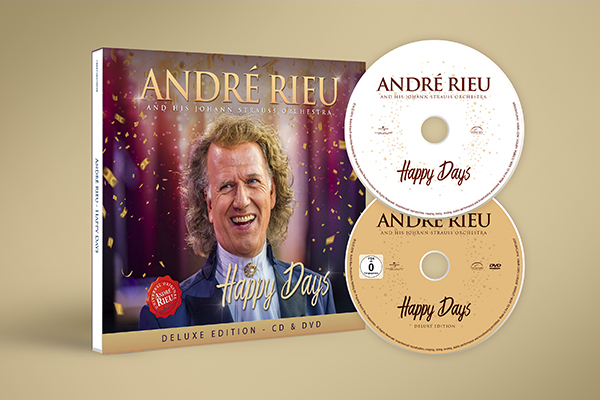 The legendary André Rieu will celebrate his milestone 70th birthday in 2019 with a brand new album Happy Days, released on 22nd November 2019, full of fittingly celebrational classics from the course of his remarkable career.

Fans can look forward to joyful hits like Eviva España,  Paloma Blanca, Mexico, and title-track Happy Days Are Here Again, as well as celebrations of romance such as the world famous Second Waltz, which marked André Rieu’s breakthrough in 1994.

Happy Days is also an homage to Vienna, the city that played the most important role in Rieu’s career. The King of Waltz will take you back to the Golden Age of Operetta with beautiful waltzes, lively polkas and jauntily can cans from The White Horse Inn, The Merry Widow, The Gypsy Princess or Countess Maritza – an unforgettable journey back in time to a world of amusement, champagne and love.

On his new album and celebrating his 70th birthday with his fans, André Rieu says:
“I believe that the real art is to give every single audience-member, although I play for over half a million people in a year, the feeling that I play only for them alone. This album is cheerful, festive, and humorous, but at the same time very romantic. With this record I hope to pass on my joy of life that I feel daily to everybody in the whole world. I heartily invite you to celebrate love and life with me.”

Through an incredible life with unparalleled achievement, the world-renowned violinist Rieu is the biggest Classical Music artist in the world right now. With over 40 million records sold worldwide, and selling over 600,000 tickets each year – not to mention becoming the biggest cinema music concert event of all time – it’s no wonder he has been dubbed ‘the maestro of the masses’ by the New York Times.

Alongside the new album a special CD / DVD Deluxe version of HAPPY DAYS will also be released on 22/11 including exclusive behind the scenes footage and of course a lot of music!